How to Determine the Coefficient of Air Resistance 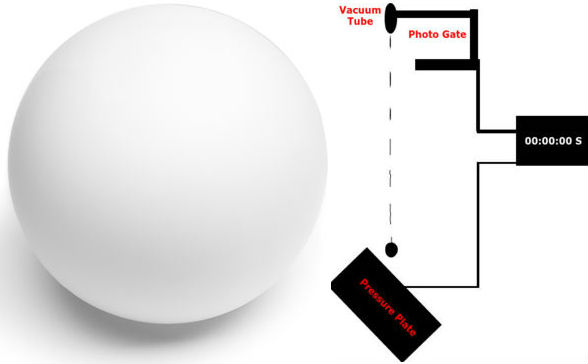 To determine the value of k, the coefficient of air resistance, using a computer model and experimental data.

The trajectory of an object can be precisely calculated using a set of kinematic equations that are based on a few initial values and constants. In two dimensions, the X and Y values can be summed up with the following equations:

Without air resistance, the only force acting on the projectile is gravity, which is constant. However, the presence of air (or any fluid medium) introduces a varying ‘drag’ force. This force acts in the opposite direction of motion and is proportional to the velocity of the projectile.

The net force has components in both (x and y) directions while the magnitude depends on velocity. Using Newton’s 2nd law, (F=ma), the resulting acceleration can be described by:

To calculate the trajectory, we must revise the kinematic equations to factor in a varying acceleration. Since this requires tricky integrations, we will resort to using Euler’s numerical method.
To apply Euler’s method, we must compute the kinematic values at very small time intervals and make the assumption that during this interval, acceleration is constant.

This experiment consists of two parts. The first part is to develop a computer model that calculates the trajectory of a projectile given some value of k (air resistance). The second part is to conduct a physical experiment where we can measure the flight time of a trajectory.

Part One: Creating a Computer Model

Our computer model is used to determine the trajectory of a projectile which varies based on a value of k. The value of k can be adjusted until the path matches the data acquired from our physical experiment, thus revealing the actual value of k. The model is constructed by applying Euler’s method in javascript form. The javascript code for determining the coefficient of air resistance using Euler’s method is shown here: The experimental value of k compared to the theoretical value is off by roughly 27%. This is a significant enough discrepancy to suggest some flaws or error in the experiment. There are a few factors that may have been a source of error.

Air Currents: Due to people opening and closing doors as well as a heater running in the stairwell, there may have been some updrafts affecting the flight of the ball. If an updraft occurred during the ball’s drop then the effective velocity would have been increased, therefore increasing the drag force and altering our determination of K.

Ball Spin: Control over the spin of the ball was limited. Any type of rotation could cause a mild ‘magnus effect’. This could slow down the descent of the ball.

Overall, this experiment exemplified an effective way to determine the coefficient of air resistance. With a few small adjustments to the experiment we could easily negate the original sources of error and obtain a more accurate value of K.

This site uses Akismet to reduce spam. Learn how your comment data is processed.